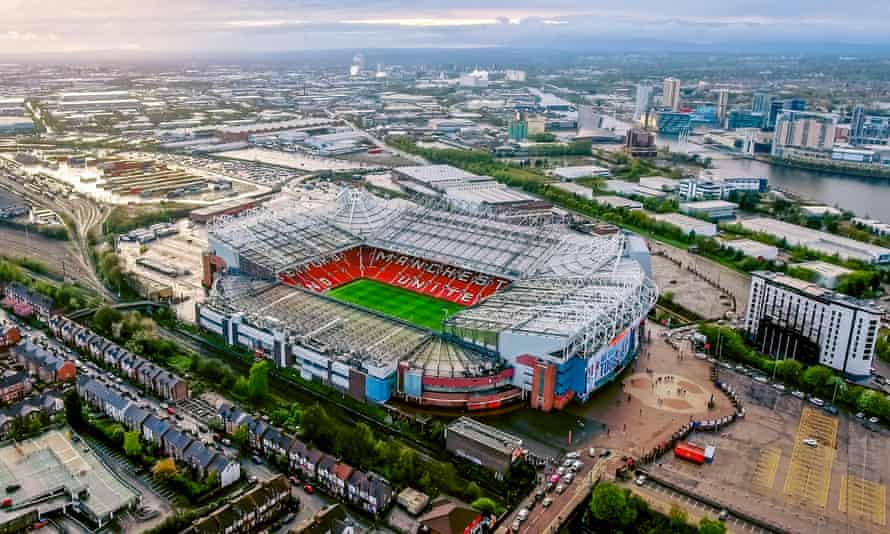 The ‘Theatre of Dreams’, the history of Old Trafford. This article will cover the past of Manchester United Stadiums going back to where it all began in 1878. We are going to begin at the roots of the club, at North Road Stadium and will cover the journey of United’s time at different grounds, including Bank Street, Maine Road and Old Trafford.

Before we begin, we have a blog dedicated to ‘Sports bars in Manchester‘ that you football lovers may be interested in!

The Story of Manchester United Stadiums

Manchester United was founded by a group of railroad workers, back then they were named ‘Newton Heath LYR’ (Lancashire and Yorkshire Railway). The initial stadium they played at had the capacity for 12,000 standing spectators. It was located at North Road, Newton Heath.

In 1891 the capacity increased to 15,000 when two grandstands were added to the ground. By 1893 Newton Heath had lost sponsorship of the railroad meaning that the club had to look for a new home away from North Road, all whilst facing financial difficulties.

Just 3 miles away from their first ground, the club moved to Bank Street stadium in 1893. Initially, the stadium had no stands which would have being quite a change from the 15,000 spectator capacity at the previous ground. Fortunately before the season started, two stand were built enabling Bank Street to house up to 12,000 spectators.

Following the financial difficulty of the club and on the edge of bankruptcy, the club was potentially at its lowest point. John Henry Davies came along and invested heavily in the club and made alterations to get the club back on its feet. Davies had great ambitions for the club and his first significant order involved changing the name of the club to ‘Manchester United’ and altering the strip to red and white.

After this point Davies turned his focus toward the stadium. By 1906, Manchester United had the first covered stand in the country with a capacity of over 50,000. This investment was huge for the club and with the money behind them, United managed to win their first league title in 1908.

With the population rising across the country and by up to two million in Manchester city centre, Davies began planning for a bigger, better stadium with a larger capacity. The aim of this was to make sure the club was capitalised. By 1909 details of the new 100,000 capacity stadium were revealed as United were well on their way to the first FA triumph. The stadium cost around £60,000 which in 1909 was a hefty sum, the brief was simple. To create the finest stadium in the North. Although the aim was to fulfil a capacity of 100,000, this had to be reduced to a more realistic 80,000 which helped to save the club some money.

The architect who worked with Davies to create his vision was Archibald Leitch who helped to design Old Trafford. He was responsible for more than 20 stadiums across the UK including Stamford Bridge, Arsenal and Celtic.

The stadium first opened its turnstiles to the first game in the new stadium was against Liverpool in 1910. Unfortunately, United lost 4-3 but after this loss, United went a full year before losing at Old Trafford again. In 1911 Old Trafford was picked to host one of the FA cup semi-finals which demonstrates the impressiveness of the stadium. Manchester United’s stadium reached its highest attendance yet in 1939 where it reached a total of 76,962 fans during an FA cup semi final match between Wolves and Grimsby town.

Unfortunately, due to Old Trafford’s proximity to the Trafford Park industrial estate, during the second world war Old Trafford was heavily damaged by the German air raids. It took almost 10 years to rebuild it with delays being caused by the limited resources post war. During the time of the rebuild Manchester United played at the ground of their rivals Manchester City at Maine Road Stadium.

During United’s time at Maine Road, they set records that most Manchester City Fans would not want to talk about. Such as in a league game when United played Arsenal back in 1947, the spectator count of those who attended Maine Road was 83,260. This record for the most attended game in Football League History is yet to be matched even today.

The Rebuilding Of Old Trafford

By 1949, United were finally able to move back to their rebuilt and reconstructed stadium, which this time was smaller but had some incremental improvements. There was also a complete renovation of the North Stand in the 1960s too where it held the first private boxes ever constructed at a british football ground.

In the 70s and 80s, Old Trafford gradually continued to improve to include new covers and increased seating areas. At the same time as this the rise of the hooligan era began to take off which led to the installation of security fences which would separate the stands from the pitch. By the early 1990’s plans were implemented to convert the stadium so that all of the stands were seated. This would help to make the stadium safer for all.

Since the Glazers took over the club in 2005 there has been no huge changes to Old Trafford and no noticeable modernisations to the ground. Although the capacity was increased via the quadrants built in 2006 which was given the green light before the Glazer family took over. This has left many supporters lacking faith in the owners because of their inability to commit to a substantial long term investment into the stadium.

Old Trafford remains one of Manchester’s top attractions offering daily guided tours around the grounds which are hugely popular. You can also find out more about the history of Old Trafford and other football stadiums at the National Football Museum where you can see a large collection of football memorabilia. Located at the Urbis building in Manchester’s City Centre, this museum is a must see for any football lover. We will be talking more about it one of our future articles in our local guide to the football museum in Manchester.

We hope you enjoyed learning about the history of Manchester football stadiums. If you did, check out some of our other blogs. You may enjoy ‘Manchester Music Scene Through The Decades’ or even ‘Cheap things to do in Manchester‘ for some great museum and historic walk recommendation.