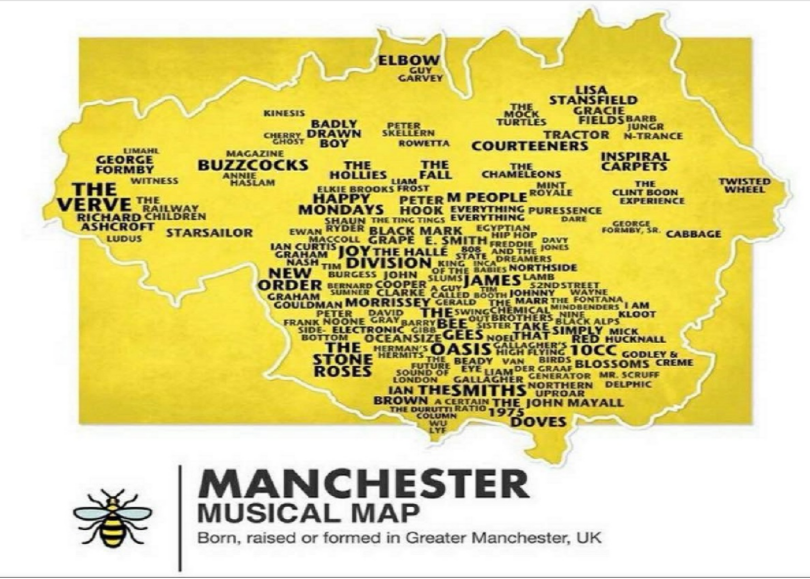 Manchester is renowned for its music scene, home to some of the most famous singers and bands in the country. Having birthed the likes of Oasis, The Smiths and The Stone Roses, many people see Manchester as the birthplace of indie music. In this article we are going to be discussing the Manchester Music Scene through the decades right up until 2021. The music scene is still thriving with a diverse range of music venues such as The Warehouse Project, Albert Hall, Castlefield Bowl as well as the new and upcoming artists.

The first decade we are going to talk about is the 1950s. Following the war, a young guy from Salford called ‘Ewan MaColl’ was to become one of the most influential artists in the history of British music. Another influence of the Manchester music scene was Jimmie Miller who was once known for deserting the army in 1940. He wrote many songs about the working class struggles in Britain, many relating specifically to Manchester, Salford and Lancashire. His work would go on to be covered by some of the most famous artists in history including Elvis Presley, George Michael, Celine Dion and The Temptations. His work has continued to influence Manchester artists ever since.

Next we are going to be discussing the 1960s and the fantastic musicians that decade produced. This includes some of the following Manchester beat groups, some you may have heard of, others may be too far before your time.

In the 1970s England had two great cities for punk. London of course being one but Manchester being a close second. Aswell as punk music, there was the great impact of four brothers from Chorlton who spent 25 of the 32 consecutive weeks at the top of the billboard charts. Thie Bee Gees were known for defining the disco era. One of our favourite bands from this decade has to be Joy Division who lead us onto the next era, the 1980s.

Potentially the most influential era of the Manchester music scene is the 1980s, boasting some of the biggest bands in UK history including the likes of The Smiths and The Stone Roses. We don’t know about you but this is our favorite era of music in Manchester. This decade was the period in which the term ‘Madchester’ was coined. Manchester musicians from the 1980s:

Aswell as having some great bands, the 1980s blessed Manchester with more than just artists. It was also the decade when the infamous hacienda was built. Known for hosting some of the biggest musicians at the time including Madonna, Blur and many more.

The Hacienda became a more and more popular venue but unfortunately by the 1990s drugs and gangs had become a permanent fixture of the Hacienda. This led to it closing its doors for good in 1997 following a drug related death and various shootings at the venue.

During the 1990s many of the bands who found fame in the previous decade only grew even bigger and more popular. Some other bands who emerged include the Charlatans who was fronted by Salford born Tim Burgess and who went straight to number 1 with their debut album ‘some friendly’. Other famous 90s Manchester artists:

In more recent years the music scene Manchester has to offer has continued to grow, with new bands forming and older bands going for a solo career, with others like The Stone Roses reforming. It’s no wonder Mancheser is famed for its music scene, we can see why after listing so many amazing artists over the decades. Here are some of the more recent Manchester artists:

Overview of Manchester Music Scene Through The Decades

We hope this article has given you a better background of the Manchester Music Scene and shown why Manchester prides itself on its musical heritage. If there are any artists we’ve missed out please let us know and we’d love to check them out. To find out more about the wonderful city of Manchester take a look at gigs in Manchester recommend for you music lovers or check out the history on Manchester United Stadiums for you history lovers. Don’t forget to Enjoy Manchester.