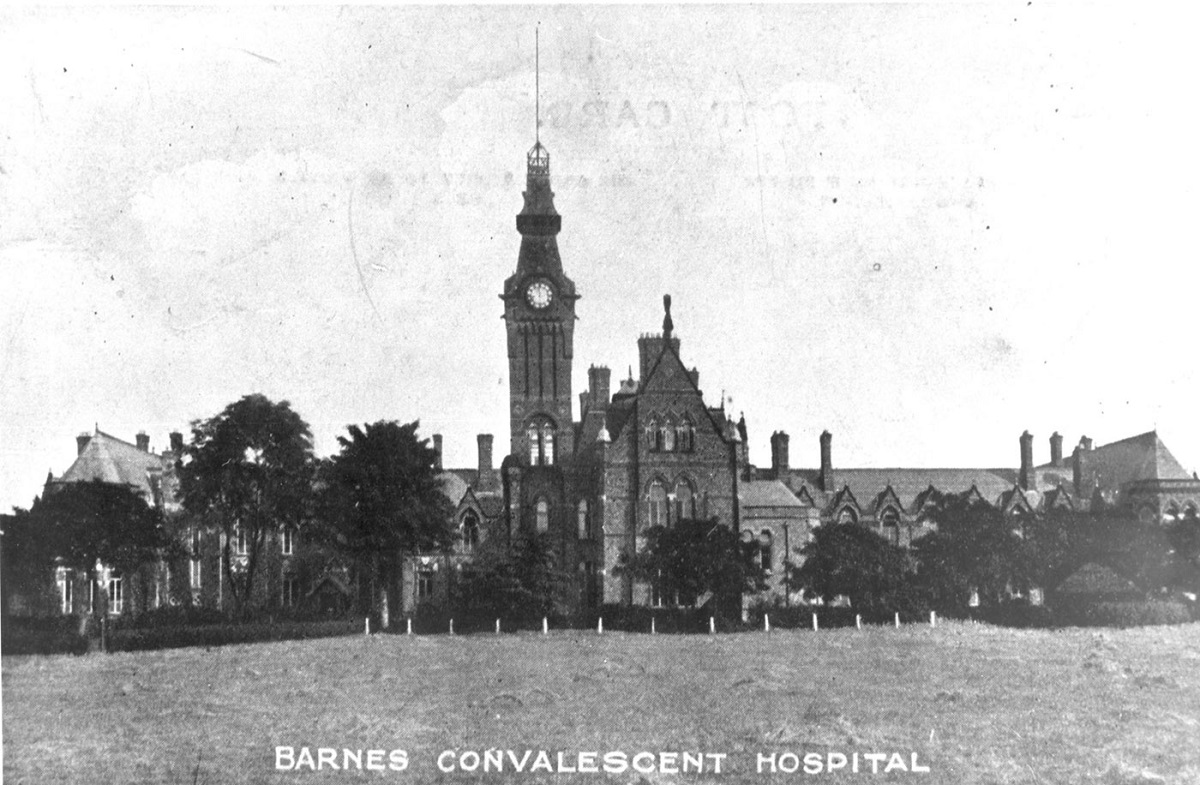 If you are after some real haunted horrors then you are sure to find something scary on our list of haunted places Manchester. Our top 10 list features a variety of locations in and around the city of Manchester. Scare yourself silly this Halloween and book on to a guided ghost tour or visit these places yourself, if you dare.

Built in Cheadle in 1875, even just the sight of the Barnes Hospital is enough to send shivers down your spine. The listed building was once a hospital, initially set up to provide respite care for workers from the city with chronic illnesses. As time progressed the hospital was used to treat soldiers in WW2, many of whom were badly injured and diseased. It’s definitely safe to say the hospital has seen plenty of deaths in its time.

Throughout the life of the hospital, a number of nurses reported feelings of being watched. One nurse claimed seeing one of her patients up and dressed and walking down the stairs as if to go home, only to discover he had passed away the previous night.

When it was built it was surrounded by beautiful countryside, although since then it has been absorbed with semi-urban environments making the sinister looking hospital which was abandoned in 1999 stick out like a sore thumb. As curiosity prevailed, ghost hunters have reported even more activity including moans, bangs and doors slamming. In order to stop visitors entering and even vandalising the property any further, watchmen were employed to keep people out. The staff turnover was high with watchmen reporting seeing ghostly figures and hearing excessive ringing of the bell tower.

Since then the building has been transformed into contemporary apartments and is now the centre of a recent housing development called Barnes Village.

The Peveril of The Peak Pub

If you’ve walked around Manchester before, you are likely to have spotted this pub, hint- its bright emerald green. For those who don’t know it, its Peveril Of The Peak, built in the early 19th century this pub has been serving pints for close to 300 years. The pub is bursting with history with its original cladding on the exterior and stunning Victorian oak interior.

Most of the spooky stories at this pub involve mysterious moving chairs, levitating glasses and a general feeling of a supernatural presence. It is safe to say this pub has made it onto the top ten list of Haunted places Manchester.

For more information on pubs in Manchester, you can read here.

Next on our list is this stunning 14th century Wythenshawe Hall, a stately home with an interesting history and spookalicious past full of ghostly tales. The hall is infamous for having its own white lady and you can find her frantically running in between rooms on the upper floors. The story behind the white lady is that she is in fact the ghost of Mary Webb. Mary Webb was a former servant who worked at the hall in the 1640s and is said to have been caught in a crossfire when the hall was under siege during the civil war.  It’s not just the upper levels of Wythenshawe hall that are haunted, the lower floors are just as blood curdling. Staff have reported footsteps, bangs and even the noise of gunfire and the library often makes sounds as if furniture is being rearranged.

The first version of this stunning building was built in 1792 where it began its life as a trading hall. This wasn’t just any ordinary trading hall, it was the very centre of the industrial revolution and the place where the world-wide price of cotton was controlled. Other versions of the Royal Exchange were built between 1809 and 1874, unfortunately the building was badly damaged in the blitz of WW2. This marked the slow decline of the building as a trading hall which closed in 1968. In the 1970s a theatre company saw the potential in the building as a theatre space.

Many ghosts are said to call this place home with the infamous green room rumoured to be haunted by glamorous ghosts who would fit right in in any old Hollywood film. There is also said to be a more mischievous spirit in the wig room who has been known to knock vases off of tables.

Read more about the Royal Exchange Theatre and other theatre venues in Manchester here.

Dating back as far as 1292 is the plot of Wardley Hall in Worsely. This property was built during the short reign of King Edward VI around the years of 1547 which demonstrates a perfect example of early tudor architecture. The hall is now home to the ghost of benedictine monk Edward Ambrose Barlow who was hanged, drawn and quartered at Lancaster castle in 1641. The reason for his death was because he was a Catholic priest who preached at the time of the newly protestant England.

At the time of Barlow’s death, Wardley hall was home to Lord Francis Downes who decided to secretly secure the head of father Barlow who had become one of the Forty Martyrs of England and wales- roman catholic priests who did not accept Henry VIII’s act of supremacy.

In the 18th century the new owner of Wardley Hall discovered the skull hidden behind a compartment and threw it into the moat. After that a terrible raging storm followed causing the new owner to drain the moat and return the skull to its original position. Over the years owners have made attempts to remove or destroy the skull, only to find it outside of the hall the very next day. Any attempts to remove the skull for good are not advised.

Built in 1910 by Reverend Samuel Collier, the head of the largest Methodist congregation in the world at that time. Albert hall was built with a stunning neo-gothic design and an impressive horse shoe shaped upper hall created so he could preach to his congregation with ease.

Today, Albert Hall is an incredible and unique music venue, but this is where the trouble kicks in. There is said to be a noisy ghost who is active across the chapel hall and lower floors with lights turning off randomly and glasses smashing on their own. The spirit is said to be that of Samuel Collier, who as a Methodist preacher is unsurprisingly not impressed and even angered at the drinking and antics that take place inside the walls of his beloved space.

Ghost hunters and spiritual investigators have also found large numbers of orbs in the area which implies a strong presence of supernatural activity.

Said to be one of the most haunted places in the whole of the UK. The building is located on a site that’s foundations date back as far as the Saxon period, however, the land has more history than that. Apparently the site of the pub was once a druid temple in the bronze age, a time where dark rituals and human sacrifice were the norm. Parts of the pub even date back to 12th century, so you can only imagine all of the activities that might have happened within the 4 walls.

The resident ghost is known as the sad cavalier who owners have nicknamed Edward. To make himself known he moves glasses along the bar, stomps around on the upper floors and lets out peculiar moans. Edward is thought to have been alive during the civil war when a small group of royalists used the ring o’ bells as a secret base which has an escape tunnel from the pub to the local parish church. One night however, the royalists were betrayed and upon using the tunnel to seek refuge in the church, they were met by the roundheads and what followed was a brutal massacre.

The story doesn’t stop there. In the 17th century, the pub became home to a pair of serial killer landlords. Wealthy guests were lured into the inn, murdered and their valuables would be taken to keep the killers’ pockets lined. Many have reports seeing ghostly figures inside the property which can be explained by the high death count of the pub.

Situated just beneath the surface of Manchester sits a complex network of spooky underground tunnels. These tunnels include the remnants of a tube station that never followed through, a communications bunker, air raid shelters, canals and even shops! Those brave enough to head down into the underworld have reported a number of ghostly sightings at the Victoria Arches in particular. Fortunately, thanks to Keith Warrender, author and explorer, we don’t have to go down there ourselves. He discovered everything you can imagine from an underground rail network, toilets and a phone exchange.

Another Tudor hall jack packed with history and hauntings, Ordsall Hall too makes the list of most haunted places Manchester. Parts of the house date back as far as the 13th century with most historians agreeing the property was first established in the time of Henry the VIII. But who are the ghosts who haunt Ordsall Hall?

The most famous is the classic white lady who is said to have appeared in multiple locations across England, all with a similar backstory. Ordsalls While Lady is thought to be the spirit of Margaret Radclyff, the maid of honour to Queen Elizabeth I was most definitely an influential figure in late Tudor society.

Another well known ghost is young Cecily, a girl said to roam Ordsall and to become particularly active when children or schools come to visit the hall. It is believed that she was jilted the morning of her wedding and unable to cope with having her heartbroken so unexpectedly, she is thought to have thrown herself off the main staircase in the hall.

The last ghostly inhabitant of Ordsall Hall is Sir John Radcylff who refuses to leave. His presence is strongest in the star chamber and is said to be quite the ladies man with many female visitors reporting his advances on a variety of occasions.

We’ve covered all manner of haunted buildings in and around the city of Manchester but it would be criminal not to include one of the most haunted ancient woodlands surrounding the area- Boggart Hole Clough. The area covers more than 170 acres of dense woodland with roots as far as the bronze age. Subsequently this beautiful forest is full of spiritual history making it feel particularly eerie.

The most famous legend is unique as this time it doesn’t involve ghoulish figures and paranormal activity, this location is haunted by a boggart. Now, you may recognise this name from Harry Potter, a Boggart is a mischievous creature very similar to a goblin. But did you know that they come specifically from Lancashire folklore. Boggarts are drawn to muddy holes and love hanging out under bridges which bogarts hole is full of. Would you be brave enough to visit Boggart hole?

Are you brave enough for a twisted tour to explore some of the most haunted places Manchester? If there is anywhere we have missed off the list we’d love to hear from you. Alternatively if you have a Spooktacular story to share, please do not hesitate to get in touch. If you don’t fancy coming face to face with real ghosts why not see the top 10 Halloween events of this year in our previous article to get in the spirit without the supernatural.